The Need for Whole Vessel Management

Ship owners and operators have started to explore more fuel efficient vessels and low carbon fuel options, but these changes alone will not be able to meet the future efficiency, air pollution and carbon emission requirements facing the marine industry.

As a result, in an increasingly environmentally conscious maritime sector, there is a growing realisation that effective energy management at both the individual vessel and overall fleet levels will be the key to not only complying with ever tighter emissions regulations, but also to reducing costs and maintaining maximum operational competitiveness.

To meet this need, a holistic approach to vessel energy management (VEM) essentially involves the development of a systematic assessment of the different energy flows across a ship’s entire operation.

In this way, the direct links of energy consumption and distribution for all on-board systems in different modes of operation can be captured, measured and understood. This will enable effective steps to be taken to ensure that a vessel operates at peak performance levels to maximise energy efficiency.

This focus on energy efficiency lies very much at the centre of the marine digitalisation drive. With vessels increasingly becoming sophisticated sensor hubs capable of handling and analysing data from multiple sources, operational behaviours can be changed and improved so that performance benefits are delivered more quickly.

In particular, with the greater availability and use of intelligent on-board data, a better understanding of the power consumption and energy flows throughout an entire ship will become essential to ensure that all systems and sub systems involved in the operation of a vessel are running at optimum performance and within environmental limits.

Holistic vessel energy management will be most effective if it is planned and implemented on a fleet management level. Energy and environmental management should not be limited to individual vessels but directed across fleet operations as a whole. - Neil Graham, Technical Director, Royston

Under the current regulations, ships have to have an energy efficiency management plan in place in the form of a practical approach to better vessel management and fleet efficiency performance over time. Typical examples include improved voyage planning, hull and propeller cleaning and the impact of introducing new technical measures.

In addition, in 2016 IMO adopted mandatory requirements for ships of 5,000 gross tonnage and above for the collection of consumption data for each type of fuel oil used, as well as other information. It is intended that the data collected will provide a firm basis on which future decisions on additional measures will be made.

However, marine vessel efficiency is a complex process, with the performance of any individual ship being influenced by many interconnected systems, all of which affect energy use.

Traditionally, energy efficiency has largely been considered on the basis of fuel consumption in relation to propulsion and has rarely included the various other on-board processes and services required during the different types of vessel operations or activity.

In the circumstances, a more thorough knowledge of energy flow and the relative proportions of energy consumed during different vessel operations and within each system or component, will lead to a greater understanding and more informed decision making around improving energy efficiency, and ultimately fuel consumption and vessel design.

The Demands of New Regulation

The impact of air pollution from ships is under constant scrutiny. In April 2018, the IMO agreed to a preliminary goal aimed at reducing CO2 emissions from shipping by a minimum of 40% by cargo tonne mile by 2030 (whilst pursuing efforts towards a 70% reduction by 2050) and a 50% reduction in overall greenhouse gas emissions by 2050, compared to 2008 levels.

To tackle sulphur dioxide and nitrogen oxide, the IMO has also introduced a series of global caps and more stringent requirements in designated Emissions Control Areas. As part of these measures, a new 0.5% global sulphur cap on fuel content was enforced from 1 January 2020 – a measure that affects an estimated 70,000 ships.

The most effective means of reducing harmful emissions from a vessel is to reduce fuel consumption but it is widely recognised that the answer will not be as simple as this. Lowering the carbon footprint of an industry that moves almost 90% of global trade is a significant undertaking and will only be successful if it involves changing established behaviours, introducing new technologies and developing more effective operating procedures.

In particular, those vessel operators that have an effective energy management strategy in place will have a competitive advantage as a result of more efficient fuel use and lower operating costs. It follows that those fleet management operations that are committed to holistic vessel energy management will inevitably help to shape the future of the market.

A vessel both transforms and consumes energy at the same time. Chemical energy in the form of fuel is converted to mechanical and electrical power by the main and auxiliary engines to operate the propellers, boiler, engine room and deck machinery, hotel load, refrigeration, navigation and communications equipment etc.

To fully understand and monitor energy efficiency across these operations the data needs to be collected and systematically recorded, and then made available in a suitable ‘user functional’ format to allow interpretation for informed decision making and actions to ensure optimum day to day operations.

Various on board sensors are already used to measure different aspects of ship performance, such as fuel flow, engine torque, RPM and power, as well as temperatures, pressures, electrical load and speed of the vessel. However, large and complex data sets generated by the on-board systems and equipment are notoriously difficult to process and analyse using traditional processing techniques and applications.

To overcome this problem, as part of a pioneering Vessel Energy Management programme undertaken by Royston in collaboration with Newcastle University, recent work has focussed on successfully collecting the raw data in real time – and successfully converting it into a format that is capable of subsequent smart analysis to enable user functionality and decision making.

The output of the data aggregator and communication platform developed by this work enables the on-board display of real time data, and its inclusion in a database format that can be transmitted onshore via a cloud service for further analysis.

To validate whole vessel energy management a number of tests, trials and surveys have been carried out on different types of vessels to validate the approach and demonstrate the fuel/energy savings potential of the concept.

For example, in performance trials and fuel consumption audits undertaken on a passenger ferry, the data acquisition unit installed on-board successfully gathered engine and fuel data from all the sensors on-board the vessel. This information was used to accurately determine the ship’s power and speed and also calculate that during the vessel’s preferred mode of operation, the fuel consumed was split 46.5% by the main engine (including 21.6% useful engine brake power and 24.9% wasted in heat loss) and 53.5% to the auxiliary engines (comprising 20.6% useful brake power plus 3.3 % hotel load and 29.6% wasted in heat loss), as illustrated by the following Sankey Diagram, which is a type of flow diagram in which the width of the arrows is proportional to the flow rate and where the widths of the bands are linearly proportional to energy production, utilisation and loss:

Despite the hotel load being relatively low on the ferry, the availability of this energy flow information demonstrated that substantial savings could be made by adjusting the way the crew managed the equipment on a 24 x 7 basis. Also by enabling a comparison of base electrical loads against actual electrical loads to be made, the operational efficiencies of individual items of equipment could also be determined. In this way, the efficiency values calculated can be used as benchmarks to describe the state of the vessel at current and different operational conditions. This principle can be applied across the various items of machinery and equipment in the engine room and elsewhere on board.

In other tests, similar results to this example were also produced for other vessels in operation around the UK including trials that have been undertaken on an offshore support vessel, a tug and a marine research vessel.

One of the common strategies for ship operators to save fuel is managing the vessel speed – often referred to as optimal or Eco Speed. On board trials using the enginei™ Electronic Fuel Management System (EFMS) by a major ferry operator during normal operations have been used to determine the most economic speed for the vessel during transit. By adjusting this figure to take into account ferry schedules and the vessel’s fuel consumption model, an optimal operating speed was identified that would be capable of both meeting timetable requirements and considerably reducing fuel burn.

Real cost savings are demonstrated by trialling the ship for Eco Speed and plotting vessel speed against fuel consumption whilst also giving due consideration to the commercial necessity of the voyage. This includes a consideration for the historical “slack” in the vessel’s schedule as well as the wind and weather patterns. Therefore, by using the Eco Speed trial to determine the possible reduction in vessel speed - in this case approximately 15% - that still satisfies timetable requirements, we have calculated potential annual savings such that the investment in an enginei™ fuel management system will give pay-back of less than 6 months.

Of course, in reality an operational speed reduction of this magnitude is unlikely to be realistic as vessels such as ferries have agreed timetables, but the data does prove that large savings can certainly be made by operating at more economic speeds. For example, using this same data, it can be estimated that shaving 0.5kn off a vessel’s top speed of 19.5kn will produce projected savings of around £60,000 per annum – and a ROI of less than one year.

Although the trials have demonstrated the effectiveness of providing relevant EFMS information to the onboard crew so that the appropriate vessel operational decisions could be taken, remote configuration of the system also provides the ability for shore based fleet management personnel to determine the economic speed of any vessel.

The other main conclusion arrived at is the ability to accurately measure electrical loads on any circuit on board the ship – large or small. The introduction of non-invasive current transformers to accurately measure loads and compare these with the base line load distribution figures provided by the ship can demonstrate how a particular machine or item of equipment is drawing too much or too little current, and thereby indicate a running fault and a need for maintenance or operational adjustment and ultimately provide an improvement in energy efficiency.

A load profile from the machine / equipment manufacturers, or a load distribution chart from the ship builder, will be used to compare with the current being measured at 100% load. If this information is not available, a load profile can be drawn up from the measured data of healthy machines and equipment and that data is then monitored to determine changes in performance.

With a comprehensive data acquisition system installed on board, as well as being able to measure vessel operational and machinery performance, a combined hull and propeller efficiency of the vessel can be calculated with a longer term data series. The values calculated can be used as benchmarks to describe the state of the vessel’s current condition.

The Benefits of VEM 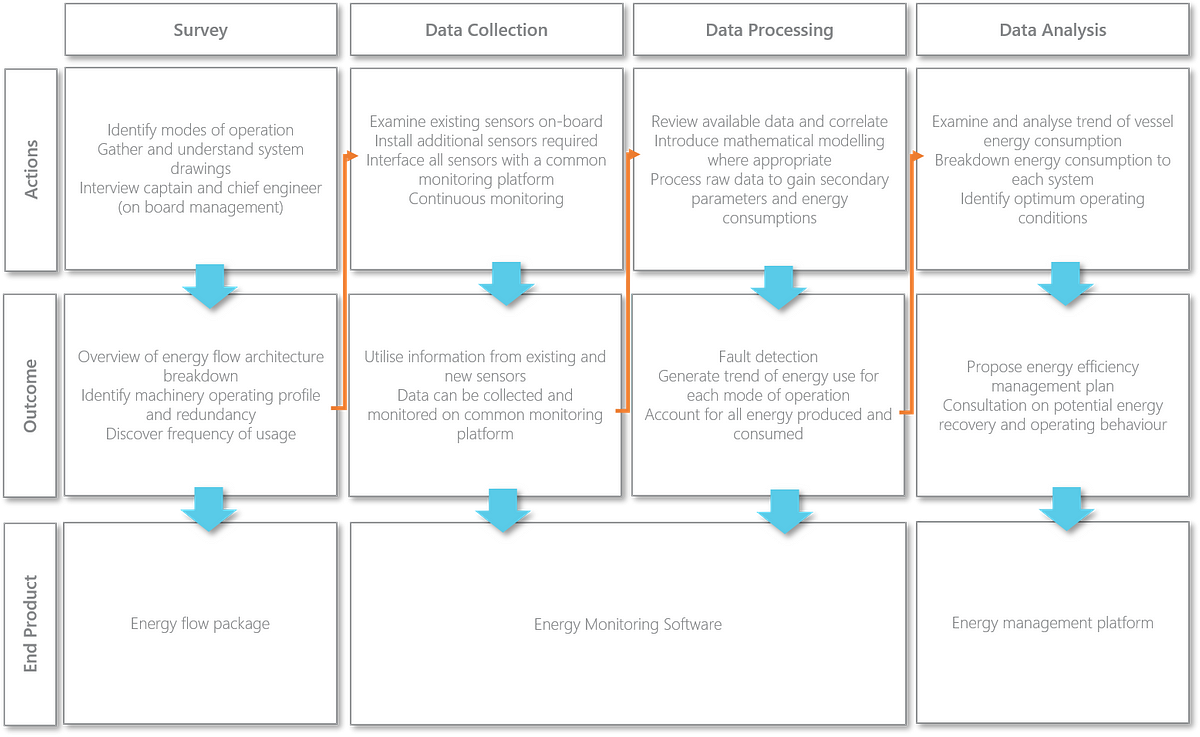 Want to find out more?Get in touch for more information and a no obligation quote.